It’s been a while, in fact I hadn’t realised how long it had been since my last post. That hasn’t been helped by how fast this year seems to be going either. Having a kid sucks up so much of what would normally have been hobby time – it’s unreal! Anyway enough pathetic excuses, what has been happening in my hobby world since last October?

An Escalation League is still going strong that is being ran at Bolton. Although its getting near the end. It certainly has introduced a lot of new people to the game. I’m playing Farmers, and I’m really enjoying playing them. I’m still playing with the original box too, so I need to add some of the second box player’s into the mix. I have stalled painting them, which is a shame, I am less than enthused about the plastic sculpts. I love the simple pick up and play aspect of the new boxes. However I am thinking of selling both my Blacksmith boxes because I cant be bothered with prepping the models to paint. I have also got some Farmers themed terrain on the go, which should have their own blog post coming soon. Finally I have been tinkering with my Guild Ball measuring stick widget designs and have got a new set cut for me by Cog O Two, again I should have a blog post about them coming soon too.

This is a cool simple game, and I really didn’t intend to buy it but I have. I haven’t bought a GW game for an awful long time and didn’t expect to either. I haven’t played the game an awful lot – not had chance – however what I have played I really enjoyed. I was hoping that I would quickly get the warbands painted up, and that being something completely different from what I have been painting recently that they would act as a palette cleanser, so to speak, enabling me to get over my ‘painting block’ and start churning out models again.

I said that game was simple, however I am struggling with the deck building aspect of the game. If I am honest I am finding the choice overwhelming, and not playing that style of game before I find choosing the cards to go along with a game plan challenging. Thankfully there are some deck examples up on the Shadespire site. I plan on using these along with the suggested tactics to get used to the way the card deck and game interacts.

Speaking of GW games, I got this for Christmas off the wife. She asked me for ideas for Christmas presents but I was a bit stumped what to ask for – a new canoe was pushing my luck. As Necromunda Underhive had just been released I thought a bit of a blast from the past would be good, and suggested that. I guess most tabletop gamers my age will have played the original release of Necromunda, I have fond memories of it from 1996 at any rate. I’ve opened the box looked at it and gone ‘wow, cool’, and subsequently put it back in the box. I have just not managed to find the time to do anything else with it sadly. Maybe I’ll get round to it at some point – sigh!

Now this was an unexpected surprise. I sold my Dystopian Wars collection to a gaming buddy of mine, he mentioned during the conversation his interest in playing some Malifaux. Now, I have tried to get into playing Malifaux a number of times over the years with not much success, and still have the models etc. So I assembled the models from the two player starter set and we played through the first few encounters to learn the game basics just the other night. We both enjoyed it, so I would expect some Malifaux models to make an appearance on the blog at some point.

OMG another new game! I bought into it the playtest because of metal models – as I alluded to earlier  I’m not a fan of the plastic sadly. Steamforged have a lot of fantastic looking models across their range, for me I feel the plastic is a bit of a let down. Although this material and their selling model does make the games (or Guild Ball at the moment) very accessible to a wide range of poeple, which is a good thing. I guess I am just in the minority in that I’d prefer a different material for my models.  I believe Godtear will be going on Kickstarter later this year, so I’ll be interested to see if there is any metal/resin model options available as exclusives or optional extras from that. 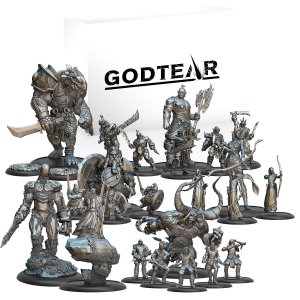 I’m quietly excited waiting for the models and rules to turn up, as I suspect a lot of people are. Studio Giraldez has painted up at least one of the Godtear minis, and posted pictures on Facebook.

I haven’t played this in a while, Guild Ball taking up all my actual gaming time recently. I’m dying to get back into this, we’ll see how it goes. I suspect there’ll be the odd model painted over the year, depending on Mayacast Masterglass themes. The current theme is the new Druze Sectorial, I am hoping to paint something for it – we’ll see.

After asking around locally I’ve found out that there is an event on the 18th March, an escalation tournament held at Preston Harlequins. I’m fairly eager to go along, although I might have to do some painting to get a 400 point force fully painted for the final round. Well I do if i want to use the Neo Terra sectorial.

Unlike in past years I’ve not bothered making any New Year Resolutions this time, it’s pointless I’ll never stick to them. I also haven’t gone back over the last year to see how much I got done of what I set out to do. I think that would depress me! I have seen a couple of friends on Facebook have been trying to keep to their hobby resolutions though – 30 mins hobby time per day sounds reasonable. I hope they keep it up!