Saturday 21st April, the sunniest day of the year, and I was at an Infinity tournament. Altrincham Gaming Club (AGC) had organised an event at the Goblin Gaming Centre, a small ITS event with 14 players. After playing at Harlequins last month I’d mentioned to Greg, from TPCB, about wanting to try and get playing some more Infinity events. It was Greg that pointed out AGC’s event to me, and so ultimately this post is all his fault 😉

The organiser of the event, Iain, had written a background story arc for the series of missions Medea’s Secret. This was something that I really enjoyed, and I appreciated the effort taken to write some background story linking the missions played at the event. The story was a continuation of background for AGC’s Infinity escalation league. The final mission itself determined an outcome for the story too.

I’ve never played at AGC but I’m intrigued to know if the story has influenced some of their terrain tables. As they have some really nice tables…although I’m not sure which tables were brought by AGC club members, as there is at least two tables I’ve seen else where…

(above photos courtesy of I. Ross and R. Rimmer)

The venue was great, Goblin Gaming is based in a small industrial unit in Northwich. I call it small, but walking in the front door is deceptive. The gaming hall is spacious, light and airy, with plenty of tables for gaming on – we were sharing the gaming space with a magic event – and some sofas forming a comfortable breakout area.

I’ve been a bit of a pillock here, as I have completely forgotten to take any photos what so ever. So I have had to beg/borrow/steal photos and images from the internet!! Thanks to Greg, Iain, Russel, and Matt for letting me use their photos.

I did make 2 lists but only played one, I had a couple of proxies in both lists, but the second list had one or two models that weren’t finished, and I don’t like playing with models that I can’t at least claim are finished lol. I actually really struggled building the 300pt lists, and this really puzzled me as I’ve played NCA at the Northern Open events before. It was bothering me so much I had to go and get my models out in front of me to build the list. At this point I remembered what the problem was… during Season 8 I was able to use Scarface and Cordelia, and as we are now playing Season 9 I have lost access to those models. To make up the points I used a couple of proxies, Cordelia earned some pay as a CSU specialist armed with Breaker Combirifle, and my converted ORC with HMG saw action on the table as a Swiss Guard HMG.

Charles’ JSA – this was a match up I was looking forward to, not because I thought I had a game plan against them, but because I have the JSA Army Pack on order 😉 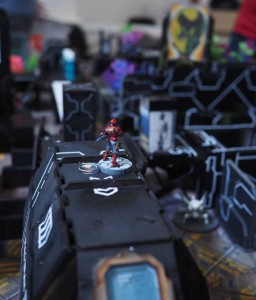 They didn’t disappoint either, they were pretty much up in my grill turn 1. I’d positioned my Fusilier link team to cover my left flank. Unfortunately for me the Musashi Haris and a Ryuken Unit 9 proved very effective at breaking the link. Allowing Yojimbo to come screaming through to finish off the defence of my left flank. This proved quite amusing, as having made it into my deployment zone a lowly Fusilier heroically fended off the Ronin and then dispatched him with a knife! Getting revenge for his lost fireteam brothers (and sister).

I was going 2nd, and towards the end of Charles’ 2nd turn we realised we would not get a third. So my second turn was spent throwing my HI forward on my right flank to take out a Domaru core link of 3, and get those high points models into the scoring zones. Even using my Lt order to coordinate move as much as my army forward as possible. This worked surprisingly well for me, but there again it would as I didnt have to be as cautious with positioning. We ended the game with me dominating all 3 zones, including the one with my data tracker (just thanks to my intelcom card). Game ended 9:1 to me, Charles getting his classified Coup de Grais. I enjoyed the game, but winning like this did feel pretty crap, a third turn would have been heavily decisive in Charles’ favour I believe. I’m not sure if it was just a lethargic start to the day for both of us, or whether I was playing slowly – I know I can get analysis paralysis – I need to work on speeding up my game play so I don’t cause this to happen in the future.

Matt’s Ikari Company – oh boy did I get a shock here. I had chosen to go second – thinking I’d have the last turn and hence a last ditch attempt to score objective points. Matt’s first orders of his first turn saw 3 Yuan-Yuan land in my deployment zone taking out my Aquilia Guard HMG (and Data Tracker). I’ll be honest I can’t remember much more of the game after this – the terror was too great.

Here is what I think happened after wards: thankfully my link team, helped by Sixth Sense Level 2 managed to survive and dispatch the surprising YY-Buggers. Although not for much longer after that – can’t remember if it was a Wu Ming HMG or a Kempeitai Marksman Rifle, but once the ML has gone, my link loses its teeth. 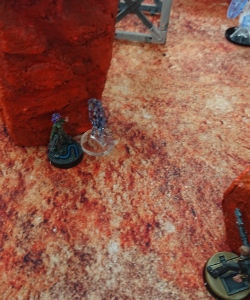 Hidden deployment – I remembered to take a picture.

I did get my own back in my turn though, with my Swiss revealing and breaking Matt’s core link. Unfortunately I then lost the Swiss and that was a position I struggled to recover from. I was fortunate not to lose my Lt too. I think Matt had assumed it was one of my Fusiliers from how I’d deployed him (I can’t claim any credit for this, it was pure luck if so). I think he figured out it was my ORC after I didn’t try and dodge with the Fusilier link, and the ORC soon became a focus of attention. The game ended with me in retreat, having achieved no objectives. I think Matt scored 5 objective points.

James’s Combined Army (I think my opponent’s name was James, I’m really sorry if I’ve got this wrong).

Up unto the start of this game I was doing well with my attention and concentration levels. But starting game 3 they went downhill rapidly. This isn’t an excuse for losing but it is an excuse for not remembering much. With that in mind here’s a download of my thoughts for the game… 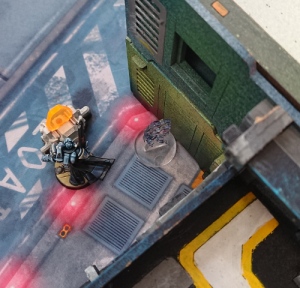 My hidden deployment – a picture I did remember to take.

I’d gone first this game, and I went into retreat again, ending the game before James could capitalise on the damage he had caused. I lost 2:0 on objectives.

There was a hell of a lot of prize support, on top of the usual ITS Pack contents there was a copy of Aristeia, a Haqqislam starter box, a limited edition Fat Yuan Yuan box, a Warcor, some Atenocitis’ products – including terrain, Art Of War Studios tokens, a £20 voucher for EBMA Hobby & Craft. And probably more stuff I’ve forgotten.

Small selection of the prize horde

Which brings me neatly to who won, here are the winners from the day’s gaming.

Most sporting, a tie between Billy Goodman and Chris Carter.

And finally, I won the best the painted army vote. So I would like to thank everyone who voted for me.

<I’ll come back and insert an army pic here>

There was so much prize support that everyone got something, which is always good to see. I came home with a little horde of goodies.

I also bought something from the shop too, the paint storage rack will probably make an appearance in a blog post soon.