The last few days my spare hobby time has been taken up with assembling models for Test Of Honour. When I first opened the box and looked at all the components on the sprue, I have to admit I felt a little daunted. All those options! What would I build?!

I started on the force required for the first mission from the battle book. My previous post shows the first of this assembly spree. When clipping the parts off the sprue I began to think that these would be fiddley models to put together. However, I haven’t used hard plastic polystyrene models for some time and I had forgotten what an easy material it is to work with when building models. The mould lines (what little there were) were easily scrapped off with little effort. With the use of polystyrene cement even the most fiddly of two-handed weapon poses were simple to put together. Especially in comparison to the models like the old metal PP Steelhead Halberdiers. I have really enjoyed building these models.

Here is the based up Ashigaru Spearmen 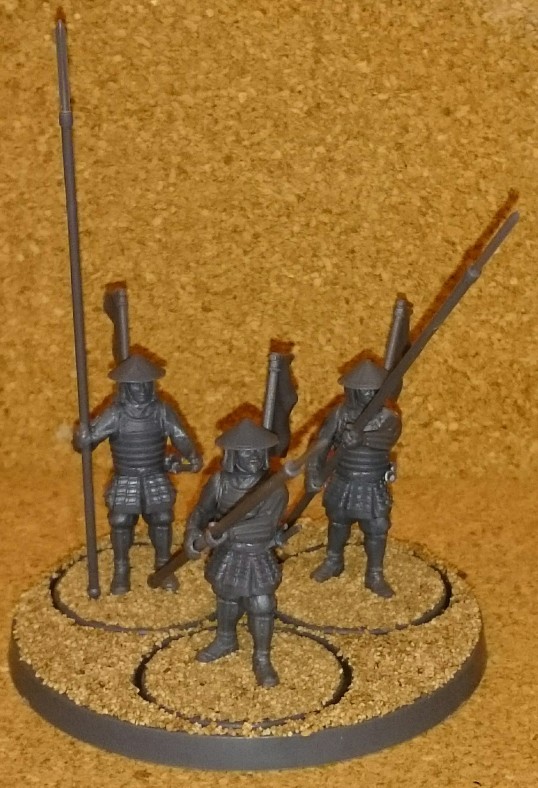 Followed by a couple of Ashigaru Bowmen, I couldn’t decide whether to keep the back banner or not on the bowmen. So the standing version has the quiver mounted at the waist and the back banner, while the kneeling bowman loses the back banner and has the quiver mounted on his back. Maybe the first is a Loyal Bowman showing his support for his lord, while the latter is an Experienced Bowman and isn’t painting a target on his back for the enemy to fire at (hell maybe he’ll even get camouflage lol). 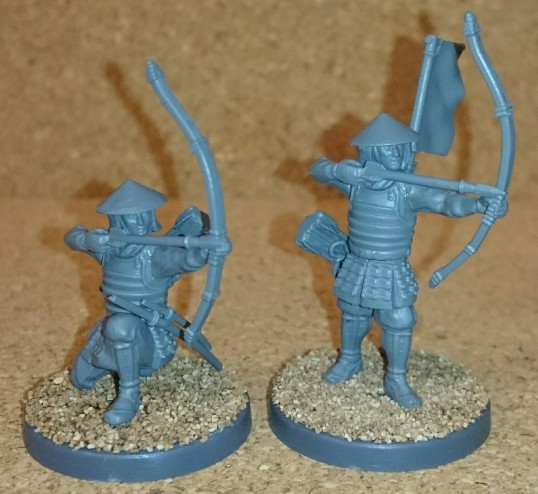 Speaking of the boss, here is my first Samurai alongside the fourth Ashigaru Spearman.

The one thing I hadn’t thought about was the bases. I glued the models to them and assumed it’d be easy to glue sand on to them later. Turns out that the warlord bases don’t take too kindly to the PVA glue I am using to attach the sand. The glue doesn’t spread, it pools together into blobs rather than putting a smooth even coat over the plastic base. The surface of the base is very shiny even though it has a texture to it, so I am assuming there is not enough of a key for the glue to hold on to. However all that is required is a quick rub with an emery board – problem solved. Just need to do that to the bases before gluing the model in place in future. 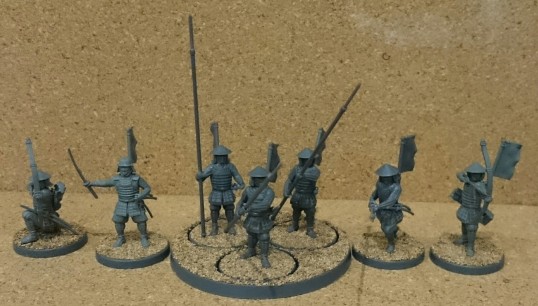 I have also been very lucky and managed to get hold of an Unarmoured Samurai model. This is the model I should have received rather than the Geisha seen in the previous post.

I may have gone on a little spending spree for accessories. Which on the one hand does mean I haven’t gone overboard on buying models… yet. Well I have bought models, just terrain instead of gaming figures. I noticed that TTCombat have some nice looking cheap Far Eastern styled terrain. So I went for a few of their buildings. I also noticed that Sarissa-precision have a 10% off code on the main page that is usable until 14th April. So I bought a couple of pieces of their scenery too.

I also bought a dice bag for drawing out the Action Tokens from, more on that in another post.

Why the Last Samurai part then? Well in the Grand National sweep stake running at work I drew ‘The Last Samurai’ from the pot. It seemed quite apt given my current hobby subjects.