Today’s blog post is less about painting progress and more about painting anticipation. I’m excited because I pre-ordered myself a copy of “Painting Miniatures from A to Z, Masterclass Volume 2” by Ángel Giráldez today.

When I first started dabbling with Infinity at the start of 2015 I pre-ordered Volume 1. If you look at my other painted models on this blog I think you’ll see that pre-infinity I had a fairly dark painting style, especially in my choice of colours. Infinity with its bright clean look seemed rather daunting. So when I realised there was a painting guide being produced by Corvus Belli’s in house painter, I figured a look behind the scenes would be an excellent idea.

Volume 1 turned up in April 2015 and I wasn’t disappointed with the contents of the book at all. I had owned an airbrush for a while but never really used it for much other than undercoating and simple base coating. It was the simple well laid out steps in Volume 1 that encouraged me to try and push my painting, both brush and airbrush, and use the airbrush more. I still can’t claim to be much more than a novice with an airbrush but I definitely feel more confident using it.

Pictures speak a thousand words, or so the saying goes. So what has Volume 1 really done for me?

Well this is the first Infinity miniature I painted, well OK the first three, all painted together.

Sure they’re not bad…
However I think these next models are much better. They would be among the most recent Panoceania miniatures I’ve painted, which I think show the greatest improvement. 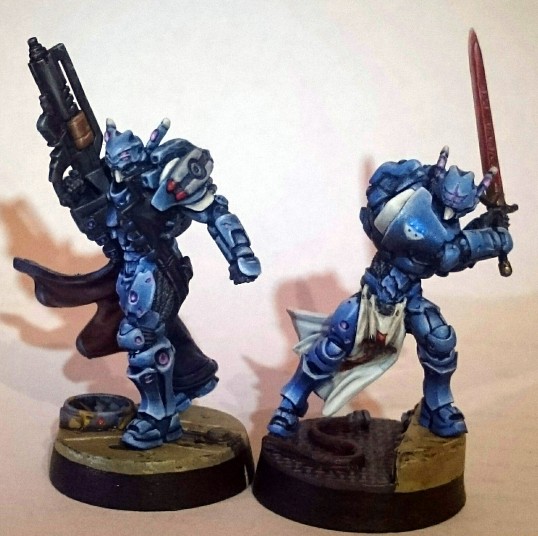 I think you can see (even with a hastily taken photo) the difference that Ángel’s book has made in my ability to work with the bright clean looks associated with Infinity.

Volume 1 came with a Limited Edition model; Joan d’Arc. At this point I should present my own beautifully painted miniature. Instead I can only show a partially painted version.

Perhaps I should pledge to finish painting Joan before Volume 2 arrives along with its Limited Edition model; Imperial Agent Crane Rank.

Volume 2 has been on the horizon for a few weeks now, and the imminent release of the book along with signing myself up to two Infinity tournaments has fired up my painting motivation again. So what is on my painting table? 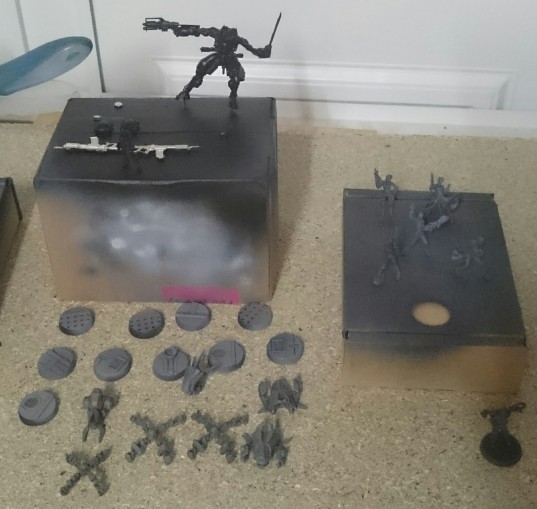 (note that’s not actually my painting table, it’s the remains of the flooring for boarding out my loft – mundane chores getting in the way of hobby time again!)
I’m planning on taking Neoterran Capitaline Army to both events although I haven’t settled on lists for either event yet. I’m hoping to get enough points painted to make a couple of lists. The missions from the events include “Tic-Tac-Toe”, so there’s an EVO Remote in there, and a couple of Bulleteers hopefully to accompany it.

I have most of a Fusilier link painted so I’ve undercoated a HMG Fusilier to fill that out. I’m using the Infinity RPG Kickstarter Pano model as a CSU.

The NCA models are filled out with a converted Hexa, and a couple of Devas (well a Deva and a Deva proxy). I don’t expect to get it all painted, but I’m hoping a nice selection of it will end up usable in my lists. While neither event requires a painted army, I do prefer to only play with painted models. While both events do not allow bare metal these models wont get based till they are at least mostly painted anyway.

Finally, I have two TAGs in work, the first is an Uhlan. It is waiting for me to decide whether I am going to use the standard scenic base, or make my own. This is a bit of a disaster as I really want to use it in the events I’ve mentioned. But being stuck in limbo waiting for me to decide about the base means it isn’t even fully assembled, never mind undercoated.

HELP: do I go with the original base or make my own? Please comment below.

The second TAG is new to NCA this ITS Season, Scarface and Cordelia. Cordelia is a nice addition to NCA being a better engineer than the only currently available option, the Machinists. Also she is in my opinion a much nicer looking model than the machinist. I’ve done a couple of conversions with this TAG team (yeah, you knew that pun was coming). Scarface has had a slight arm re-position to aim the “Panzer-pistol” at a prospective target rather than point at the ground, and hence a little bit of greenstuff sculpting to mimic the TAG’s musculature at the shoulder joint. Cordelia has had her left arm cut up, re-positioned, and pinned back together to have her presenting a bit more attitude. Instead of giving the “V for Victory” symbol she is now rather disgruntled and “flicking the V’s” but I guess that is a very UK orientated meaning of the gesture.

I’ve only just bought Scarface, in fact it arrived Saturday morning from Element Games. I mostly bought it because of the Mayacast Masterglass competition, I thought I’d get it painted up and entered into that.

The first of the two events I’ve mentioned is the Harlequins Charity Event on 30th October (there are still places left, if you’re in the Preston area get yourself entered). Apparently there might be a prise for turning up in Halloween fancy dress, given its the day before Halloween. I’m not planning on doing that, but I thought it’d be a laugh for my HVT to turn up in fancy dress. So I am painting up SLA Industries Halloween Jack as my HVT. OK it is not an Infinity model but definitely an excellent Halloween HVT proxy.

The second event is the INA: Northern Open 7. I have attended two of these before (link to post about my first), and really enjoyed myself at both of them. They are well run events, with a very friendly atmosphere. The tables are always fully painted, and playing with and against fully painted armies over fully painted terrain really adds something special to the gaming. At the first N.O. I attended I won a best painted prise (that above Father Knight). I didn’t at the second, but I’d really like to win something at the up coming November event. We’ll see if I manage to get something new and special enough painted up in time, but there are some talented folks attending, so I’d truly have to pull the proverbial bunny out of the hat for that wish to come true.